Bob Parry hit the ball out over four seasons; He never made AAA, but later coached high school 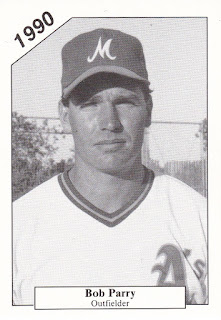 "Any one of them can hit the ball out of the park at any time," Parry told The Pomerado News that March. "There's not a weak spot in the lineup … and there's two or three in the lineup that can step up right up and do the same thing."

Years earlier, Parry could hit the ball out of the park a few times himself. He did so as a pro for four seasons, though he never made AA.

Parry's professional career began in 1987, taken by the Athletics in the 32nd round out of San Diego State University.

With the Athletics, Parry started at short-season Medford. He hit .265, with three home runs over 66 games.

For 1990, Parry played most of the year at Modesto, getting two games back at Madison. At Madison in April, Parry started a ninth-inning rally with a bunt. Overall, he hit .248. It was his final season as a pro.

Parry soon went into coaching and teaching. He continues in those roles in 2014, serving with Poway High in California.