Bob Baxter had to smile with Jamestown, because he was on Candid Camera; Later won youth coaching award

Jamestown starter Bob Baxter looked to throw the game's first pitch in this August 1990 contest, but his catcher's signs made no sense, according to The Jamestown Post-Journal.

"I didn’t know what the heck he was doing," Baxter told The Post-Journal afterward. "I figured, ‘Let’s get this game going. I’m ready to pitch.'"

Baxter soon learned the reason for his catcher's odd behavior, and that the "umpire" was one Peter Funt. The TV show Candid Camera had traveled to Jamestown and Baxter needed to smile, because he was on it, The Post-Journal wrote.

But Baxter did come ready to pitch, that night and over eight professional seasons. After that beginning - and some extra time to warm up - he threw a complete game, four-hitter for the win, The Post-Journal wrote.

Baxter's readiness would continue, enough to make AA in 1994 and AAA in 1995. Baxter, though, never made the majors.

But he later applied what he learned as a player to coach youth - and he won a national award for his work.

Baxter's career began that year in 1990, taken by the Expos in the 12th round of the draft out of Harvard.

Baxter started with the Expos there at short-season Jamestown. He went 5-4, with a 3.87 ERA over 13 starts.

In August 1992, Baxter spoke to The South Florida Sun-Sentinel about his move from starting to relief. The organization thought he'd be better there, and he took to it.

"It's fun and so far, relief has been neat," Baxter told The Sun-Sentinel. "Every pitch means something and you've got to concentrate on every pitch."

Baxter remained at Ottawa into 1997, when he moved to the Athletics system and AA Huntsville for six final outings.

Baxter eventually settled in California. In 2012, he became a Little League coach. In 2014, he was honored with the Positive Coaching Alliance’s Double-Goal Coach award, given to 25 coaches nationwide who "strive to win while pursuing the more important goal of teaching life lessons through sport," according to The San Francisco Examiner. 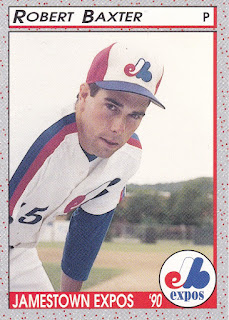