Sumter shortstop Abby Rodriguez had a tough start to this April 1991 game and it helped lead to a Sumter deficit, according to The Sumter Item.

Rodriguez committed an error in the first inning and another error in the second. Along with errors committed by two others, Sumter was left in a 4-0 hole, The Item wrote.

"We've continued to put ourselves behind in most of our games this season," Sumter manager Lorenzo Bundy told The Item afterward. "We're just making a lot of physical and mental mistakes."

Rodriguez' career began in 1989, taken by the Expos in the 69th round out of his native Puerto Rico. Rodriguez was also credited with his given name, Abimael Rodriguez.

Rodriguez started with the Expos in the rookie Gulf Coast League. In 36 games, he hit .238, with 10 RBI.

Rodriguez arrived at single-A Sumter for 1991. He scored four times in an April game, then went 2 for 3, with a run scored in a June game. He walked and scored in an August game. He got into 86 games in all and hit .212 to end his career. 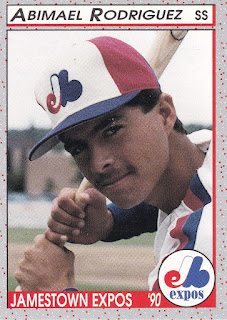