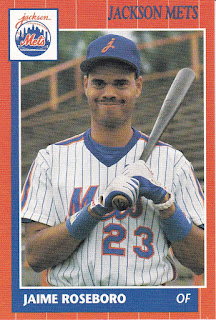 When Jaime Roseboro went to choose a position in baseball, he looked to his dad, John Roseboro for inspiration, he told The Morristown Daily Record.

The main thing was, his dad's experience at catcher over 14 big league seasons showed him what position not to take, the son told the paper.

"I started as a shortstop but made the switch to the outfield because I have good speed and a good arm," Jaime Roseboro told The Daily Record in March 1990. "If you look at my dad's fingers, they're all messed up. And his knees are bad so he has trouble getting out of his chair."

While Roseboro didn't follow his dad into catching, he also couldn't follow him to the majors. The younger Roseboro played seven pro seasons. He made AAA, but not the bigs.

Jaime Roseboro's career began in 1986, taken by the Mets in the 11th round of the draft out of Los Angeles City College.

Roseboro started with the Mets at short-season Little Falls. The outfielder hit .269 over 68 games.

Roseboro played 1989 at single-A St. Lucie, where he stole 54 bases over 95 games and hit .309 on the year. His performance was enough for the Mets to place him on their winter roster.