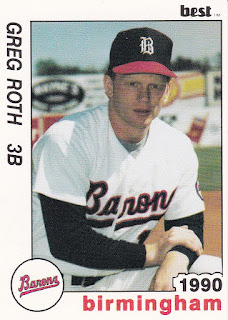 Earlier that year, Greg Roth represented Canada as a member of the country's Olympic team in Seoul, South Korea. He had also traveled elsewhere. The topper, he told his hometown Lethbridge Herald, was winning his second-straight Canadian baseball player of the year award.

But there was another topper still hoped to reach, according to The Herald, one beyond his signing with the White Sox.

"I think I have a good shot at the majors," Roth told The Herald.

Roth ultimately played professionally for four seasons, making it as high as AAA. Roth, though, never got that other topper of making the majors.

Roth's professional career began with his signing with the White Sox as a free agent in late-1988. He'd been drafted before, in 1986 as a 19-year-old out of Cochise College, by the Yankees, but he didn't sign.

For 1991, Roth saw 41 games at AA Birmingham and seven at AAA Vancouver. He also played on loan with the Orioles at AA Hagerstown. With the White Sox teams, he hit just .190. In 38 games at Hagerstown, though, he hit .345.

Roth returned to Hagerstown in 1991, but, in his 53 games, saw his average drop to just .146. He also got 18 games at AAA Rochester and one at Birmingham. But it was his final season as a pro.