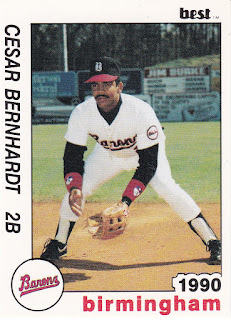 When The Chicago Tribune went down its list of White Sox prospects in 1989, there on the list was single-A South Bend infielder Cesar Bernhardt.

Size, however, would ultimately be the only comparison between Bernhardt and the Hall of Famer. Bernhardt's career would span eight professional seasons. But he would never make the majors.

Bernhardt's career began in 1986, signing with the White Sox when he was just 17. He also joined the team that his father scouted for. His father was White Sox scout Juan Bernhardt, The Tribune wrote.

In 1987, Bernhardt had three hits in a May game. He singled and scored one of Charleston's only two runs in an August win and an RBI hit in another win that month.

Bernhardt got his first look at AA in 1990, playing at Birmingham. He went .279 on the season with six home runs. In late April, Bernhardt scored on a Frank Thomas game-winning home run. That August, his single broke up a string of 15-consecutive batters set down.

That fall, in the Florida Instructional League, Bernhardt had three hits in a win over a team of Korean All-Stars. The next year, he spent time back at Birmingham, for 26 games. He also got his only look at AAA, playing 87 games at Vancouver.

In spring 1991, he got three hits in one game, along with a great defensive play. He also hit a two-run home run in an early game. He also made another perfect throw in warm ups.

The showing was enough to earn an early shot at Vancouver. He hit .260 with one home run in those 87 games at AAA. But, by August, Bernhardt was back at Birmingham, helping the Barons to an extra-inning win.

From there, his time in the White Sox system was nearly over. Played 24 games at Birmingham, knocking in a run in an early April game. He then split the rest of the year between the Brewers and Royals systems.

Bernhardt returned in 1994 with the Cubs at AA Orlando, after being called up that June from the Mexican League. He soon helped the Orlando Cubs to a 2-0 win, scoring on a single, according to The Orlando Sentinel. He had two hits in an early June game.

Bernhardt finished the year hitting .263 for the AA Cubs. It was his last year in affiliated ball.