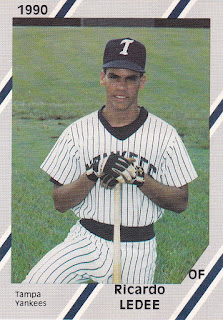 Ricky Ledee hadn't expected to play in that World Series, much less start Game 1. Given the opportunity, he quickly took advantage, according to The New York Times.

Ledee did so by going 2 for 3 with a walk. He also knocked in the Yankees' first two runs of the night.

"It's amazing," Ledee told The Times afterward. "I was fearless. I have nothing to lose. I just have to go out there and be aggressive."

Ledee went on to start three of the four games in the series - and pick up two hits in each of those three contests.

Ledee did all that in his first season in the majors. He eventually saw time in 10 big league campaigns, but he never quite equaled that early high.

Ledee's career began in 1990, taken by the Yankees in the 16th round of the draft out of his native Puerto Rico. He was then credited by his formal name, Ricardo Ledee.

Ledee started with the Yankees in the rookie Gulf Coast League at the age of 16. He spent his first three seasons there before he moved to short-season Oneonta in 1993.

"The first half of this series I really struggled," Ledee told The News & Record. "But today I woke up with a new attitude, a positive one. And everything worked out. I have to thank (Greenville manager Trey Hillman) for showing a lot of confidence in me and working with me."

Ledee made AA Norwich and then AAA Columbus in 1996, then an abbreviated 1997 at Columbus. He then debuted in the Bronx in June 1998.

He got into 42 games for the Yankees in 1998 and hit .241. Left off the postseason roster to start, an illness suffered by Darryl Strawberry led to Ledee rejoining the club, and to Ledee's World Series success.

He started 2000 with the Yankees, then he got traded to the Indians, then to the Rangers. He told The Hartford Courant the trade from the Yankees devastated him.

"I couldn't sleep, I cried all night," Ledee told The Courant. "Now I understand it's part of the business. I am still in the major leagues. I'm getting a chance to play every day."