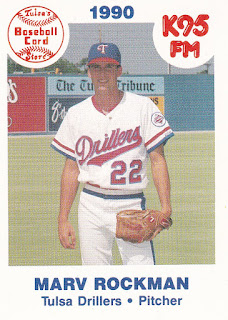 Marv Rockman's Oklahoma State Cowboys had themselves in a good position to win the 1987 College World Series and Rockman's pitching - and his sidearm delivery - helped get them there.

Rockman used his delivery to strike out nine LSU Tigers over five relief innings while not giving up a run as his team remained unbeaten, according to The Associated Press.

"I wanted to be effective and be a factor on this ballclub," Rockman told The AP after that early June game. "The sidearm helped. It got me some movement on the ball, gave me a unique pitch and the last three years I've developed control with it."

Rockman used that control to soon turn pro. He made it as high as AA over four seasons, but his delivery couldn't get him higher.

Rockman's career began in 1987, taken by the Rangers in the 27th round of the draft out of Oklahoma State. Rockman's father Marvin Rockman also played in the minors.

Along the way to the 1987 College World Series, Rockman and teammates made the conference all-tournament team. He picked up his 11th win of the year to no losses in the Midwest Regional in late-May The club went on to be the runner-up in Omaha.

Rockman started with the Rangers in the rookie Gulf Coast League and at single-A Port Charlotte. He had a 2.56 ERA between them in 24 relief appearances.

He played 1988 largely at single-A Gastonia, but also got six appearances at AA Tulsa, back home in Oklahoma. He had a 2.32 mark that year.

Rockman then spent both 1989 and 1990 back at Tulsa. He had a 3.06 ERA his first year there over 40 outings. He also looked to the majors for inspiration, specifically the Athletics' Dennis Eckersley going into 1989, he told The Tulsa World.

"He is able to strike out people with the sidearm delivery," Rockman told The World that May. "They say sidearmers are guys who rely on a sinker and get guys out on ground balls. That's what I want to do, but it helps to have that velocity, too."

Rockman returned for 1990, but his season ended up being limited to 24 outings, Rockman pitching with a shoulder problem. The team then gave him his release.

That November, Rockman had returned to Oklahoma State to finish his degree and serve as a coach.

"I'm staying in the game in another capacity,"  Rockman told The World. "I enjoy coaching, and I'm doing other things, too."