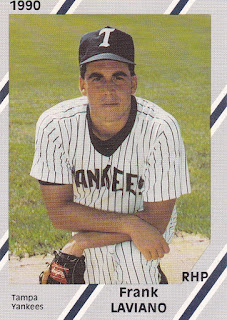 He signed with the Yankees.

"I'm a die-hard Yankee fan, so there were a lot of emotional ties to it as well," Laviano told The Journal News. "It's a nice ending to a hectic month."

Earlier that month, he'd hoped to be drafted, but teams passed him by. With the Yankees, he hit the field in rookie ball that summer. He went on to play in two more seasons. He never made AA.

Laviano's career began that month, signed by the Yankees as an undrafted free agent out of George Mason University.

He then started 1992 at single-A Greensboro. He gave up a grand slam in an April game. He only played in three other contests before he asked the Yankees for his release.

Laviano told The Hackensack Record he still believed he had potential, but he wasn't getting enough playing time to stay on.

"Maybe they thought that I was just happy to be in uniform and playing for the Yankees,," Laviano told The Record, "but it got to the point that I was so negative about it that I would go to the bullpen with turf shoes on instead of spikes."

Laviano soon returned home and went into wealth management and retirement planning. In 2019, he serves as senior vice president, financial adviser and portfolio management director for Morgan Stanley.
1990 Minor League Tally
Players/Coaches Featured:3,094
Made the Majors:1,132-36.6%
Never Made Majors:1,962-63.4%-X
5+ Seasons in the Majors: 469
10+ Seasons in the Minors:281
Posted by Steve78 at 7:00 PM