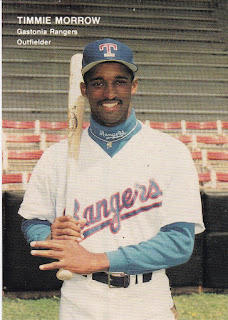 Timmie Morrow only had one hit in the game, but he made it count. In the bottom of the ninth, the score tied and two on, Morrow knocked home the game winner for the Charlotte Rangers this day, June 19, 1992.

The hit was one of 89 Morrow got for the high-A Rangers affiliate that year, but those hits amounted to a batting average on the year of just .232.

Morrow joined the Rangers system in 1988, taken by Texas in the second round of the draft out of South Alamance High in North Carolina.

At single-A Gastonia in 1990, Morrow's home run total increased to seven, but his batting average dropped to .206. Then it was high-A Charlotte for two seasons.

On May 29, 1992, Morrow's double helped Charlotte to a 4-0 first-inning lead. "I like those big first innings," manager Bump Wills told the Sarasota Herald-Tribune.

During the two years, Morrow got a 12-game look at AAA Oklahoma City, hitting .189. His final year with the Rangers system was 1994.

Two more seasons in independent ball, with the Bangor Blue Ox of the Northeast League and he was done.