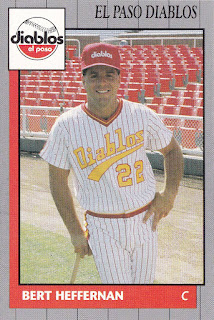 Bert Heffernan's old college coach remembered Heffernan as the toughest he'd seen, according to the book "Clemson; Where the Tigers Play."

The former Clemson catcher had been well known for his tough play and dirty uniforms, according to the book.

Heffernan went on from Clemson to a long career in the pros. In one of those seasons, he stood out enough to make the majors. He saw eight games in 1992 with the Mariners, marking the extent of his big league career.

Heffernan's career began in 1988, taken by the Brewers in the ninth round of the draft out of Clemson. Heffernan started with the Brewers between rookie Helena and single-A Beloit. He hit .276 over 70 games.

He played all of 1989 at Beloit, then moved to AA El Paso for 1990. That April, he spoke to The El Paso Times about his reputation as an all-out player. That's just the way he was, he told The Times.

He arrived with the Mariners for 1992 by way of the minor league draft. He debuted in Seattle May 13 and played his final big league game June 4. He got to the plate 11 times in eight games and picked up a single hit. He also picked up an RBI.

Heffernan moved to the Giants system for 1993. Then, after not being recorded as playing in 1994, played 1996 and 1996 at AAA Ottawa for the Expos to end his playing career.