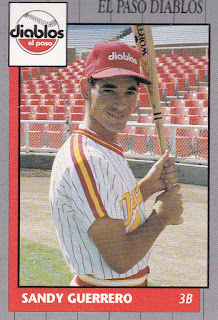 Prince Fielder looked to win his third Home Run Derby in 2015 and he turned to his old coach Sandy Guerrero to help him do it.

Guerrero had worked with Fielder in the Brewers system and Fielder had twice before called on Guerrero to pitch to him during the derby.

"It's always fun and I am always glad that he looks to me to be there with him," Guerrero told MiLB.com. "To be in a room with the best of the best in the game is an incredible moment for anybody."

Guerrero had a few moments over his own career. He started his career as a player himself. He played nine seasons in the minors. He made AAA, but not the majors.

He then went on to his career as a coach, serving with the Brewers as hitting coach at both AA and AAA for the organization.

Guerrero's career began in 1985, signed by the Blue Jays as a free agent out of his native Dominican Republic.

The Brewers also took Guerrero out of a baseball family. His father, Epy Guerrero, was a top Dominican baseball figure. His brother, Mike Guerrero, would later be signed by the Brewers and go on to his own long playing and coaching career.

Sandy Guerrero started with the Blue Jays in the rookie Gulf Coast League. He played there two seasons, hitting .288 his second year.

His time at El Paso that year also saw him play with his brother, Mike. The El Paso Times spoke with both that April, including one seeing the other move up.

"Sure, it'd be tough to see one of us go and the other to stay," Mike Guerrero told The Times. "But, I'd be happy, very happy, for him."

Sandy Guerrero, however, never saw the majors. That season in 1992 proved his last in the minors.

Guerrero soon started with the Brewers as a coach. In 2003, he served  as a coach with AA Huntsville and stayed there through 2008. He coached Fielder at Huntsville in 2004.

After Fielder's 2012 Derby win, Guerrero explained to ESPN how the win happened.