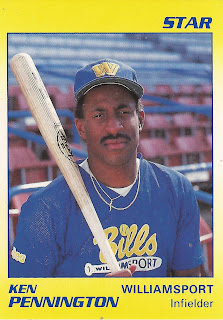 The Mariners sent Jim Presley to the Braves in January 1990 in return for two young players, one of them third baseman Ken Pennington.

Pennington, The Los Angeles Times wrote later that year, the Mariners were looking toward as their third baseman of the future.

A native of Los Angeles, Pennington's career started, taken by the Braves in the sixth round of the 1986 draft, out of El Camino College.

He played that first year at rookie league Pulaski, hitting .291 in 58 games. The next year, he moved up to single-A Sumter, his average dropping to .247.

One of his hits for Sumter in 1987 came as Sumter's only hit in an April contest. Later that month, he was one of three Sumter Braves to hit home runs in one game, The Sumter Item wrote. Pennington hit a total of eight home runs on the year.

After Sumter, Pennington moved to the Carolina League and single-A Durham, where he stayed for two seasons. He hit .316 his first year and .275 the next.

That next off-season, he caught Seattle's eye, the Mariners getting him in the deal for Presley. The Mariners also got young pitcher Gary Eave.

"The fact that we got a quality arm and another prospect made this a good deal," Mariners Manager Jim Lefebvre told UPI that January.

He also scored 59 runs, one of them in a May game with Reading. He finished strong, pounding 10 hits, two of them home runs, and had seven RBIs, winning Eastern League hitting honors, The Times wrote. The stretch raised his average from .244 to .257.

Back at AA in Jacksonville for 1991, Pennington's average dropped to .244. He got an RBI single in a May game. In 1992, Pennington moved back to high-A San Bernardino, playing 58 games there, ending his career short of the majors.