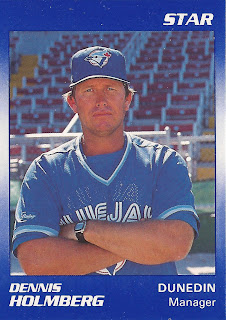 Dennis Holmberg looked ahead to the new season in 2018 a few months early. The longtime manager at rookie Bluefield,

Holmberg noted a good draft the previous year. Absent that, though, he noted to the Bluefield Daily Telegraph, he couldn't predict much.

"Every year it is a whole new cast of characters," Holmberg told the Daily Telegraph.

Holmberg has dealt with a new cast of characters over a long career as a manager in the minors - four decades. That career started in 1977, after eight seasons as a player. He has continued into 2018, largely as a manager working to send those characters on to the bigs.

Holmberg's long career in baseball began in 1970, taken by the Brewers in the fifth round of the January draft out of Brewton-Parker College in Georgia.

Holmberg started with the Brewers at short-season Newark. He hit single-A Danville in 1971 and AA San Antonio in 1972. He played his last game in 1977 at AA Holyoke. He never made AAA or the majors.

He then started his managerial career at the same place he started his playing career, Newark. In his first season, Holmberg took his Co-Pilots to a second place finish through good baseball.

Holmberg managed rookie Medicine Hat in 1979, single-A Florence for four seasons starting in 1981. He helmed high-A Dunedin from 1990 to 2002, with the exception of two seasons spent as bullpen coach in Toronto.

He returned to the New York-Penn League in 2002 at Auburn. He stayed there for nine seasons and saw his number retired by the club in 2009. In 2012, Holmberg won his 1,300th game as a minor league manager with Bluefield.

"It's a great milestone," Holmberg told MiLB.com of the accomplishment. "It's been a pretty good ride with over 2,500 games."

In 2016, Holmberg explained to Blue Jays Nation why he'd stayed in the game so long.

"Very simple: love for the game, passion for the game," Holmberg told the site. "At this level, although it might sound repetitive, it is teaching the same thing year after year for the new players that are coming in, to hopefully help them to better understand the game itself, not only on the field but off the field."
1990 Minor League Tally
Players/Coaches Featured: 2,898
Made the Majors:1,080-37.3%-X
Never Made Majors:1,818-62.7%
5+ Seasons in the Majors: 447
10+ Seasons in the Minors:270
Posted by Steve78 at 10:27 PM