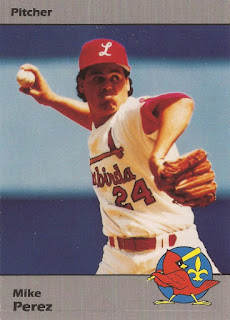 Mike Perez started 1995 with three relief appearances, picking up a save, a hold and giving up just two hits.

It was a good start. It was also a start that came less than a year after rotator cuff surgery, The Chicago Tribune wrote.

"I was kind of surprised I could come back and pitch after the surgery, but I believe it proves I'm healthy," Perez told The Tribune. He added later, "Last year was a terrible year. I'm just trying to have fun and prove that I'm back."

Perez went on to get into 68 games for the Cubs in 1995, posting an ERA of 3.66. It was the second-most number of appearances in Perez' six big league seasons to that point. He ended up pitching in two more.

Perez made the majors first in 1990, with the team that drafted him, the Cardinals. St. Louis selected Perez in the 12th round of the 1986 draft, out of the University of Florida.

Perez returned to St. Louis for 14 more games in 1991, giving up 11 earned runs in 17 innings of work. In 1992, though, Perez got more regular big league work, the most work he would see in his career.

Perez saw time in 77 games in 1992. In those 93 innings, he posted a 1.83 ERA. He also picked up nine wins in relief, his seventh in August with the help of a Luis Alicea defensive snag.

"I was just trying to keep the ball down," Perez told The Associated Press after picking up that win. "Thanks to a great play by Luis, we got the double play. If he doesn't get it, we lose."

Perez got into another 65 outings in 1993. He also picked up seven saves. That September, after the Cardinals traded Lee Smith, Perez was even looked at as the possible new closer.

Perez, though, wasn't interested, he told The Associated Press. Perez called himself a quiet guy, someone who went in, did his job and went home. Not the type of person to be a closer.

"I'm happy with what I'm doing right now," Perez told The AP. "I don't see any reason to change."