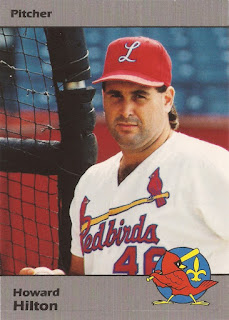 Howard Hilton faced two problems in his career, according to The Los Angeles Times.

The first problem was standard one: Hilton wanted to make the majors and then stick there. The second problem: His weight. The 6-foot-3, 247-pound right-hander knew he needed to work on that, too, The Times wrote.

"I've thrown the ball well enough to get a legitimate chance at the big leagues," Hilton told The Times in July 1990. "But they are selling a product out there and want a person to look like a ballplayer. That's why I have to lose weight."

Hilton made the majors for the first time that April. But his stay was brief, just two relief appearances. Whether he lost that weight or not, he never returned.

Hilton's battles began in 1985, taken by the Cardinals in the 22nd round of the draft, out of the University of Arkansas.

Hilton was selected by the Cardinals as his Razorbacks made a run in the College World Series, falling short of the championship. Hilton went six shutout innings in the elimination game, but he and his teammates allowed Texas back into the game to lose in extras.

Hilton started his pro career at short-season Erie. There, he went 3-7, mainly in relief work. He also picked up seven saves.

At Louisville, Hilton went 12-5, with a 3.74 ERA in 70 total relief appearances. By early July, Hilton's 10 relief wins even led the league in total wins.

Going into 1990, Hilton made the St. Louis squad, debuting April 9. He went four outs, giving up two hits and a walk in his first outing. In his second outing, two days later, Hilton went five outs, giving up no hits and two walks.

It was the extent of his major league career, two outings, an 0.00 ERA. He returned to Louisville, getting 56 outings there, with an ERA of 3.60.

By 1991, Hilton was in the Padres system, pitching at AA Wichita. His career ended in 1992, splitting time between Wichita and high-A High Desert.