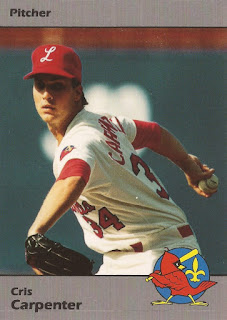 Cris Carpenter believed in his fastball going into 1988, but he also knew he needed more, he told The Associated Press.

And he would need all of them to fulfill the talk that he might see the majors that year, after not pitching professionally the previous season as contract negotiations dragged on.

"I've got to get better with my other two pitches, my slider and my changeup " Carpenter told The AP in early March. "If I can just show the hitter I have other pitches, it's only going to help."

Carpenter's professional career began as the highly touted product out of the University of Georgia. He pitched for Team USA in the 1987 Pan American Games, helping get the U.S. to the championship against Cuba. In the championship, though, Cuba amassed five runs off Carpenter, two earned, for the win. Still, he got the tournament MVP award.

"I can throw every day," Carpenter told The Chicago Tribune after the August game. "My arm rarely gets sore. I can't explain it, but I'd rather throw every day. But today, in the eighth, I started getting the ball up, and it almost seemed as if they were waiting for me to get tired and do that."

Carpenter then was already long since in the midst of contract negotiations with the Cardinals. He'd been taken by St. Louis 14th overall in that June's draft.

He told reporters days after the Cuba game that he'd hoped to have been playing professionally by then.

"It's obvious that I'm getting a lot of money for signing," Carpenter told reporters. "I'm the highest-paid Cardinal rookie ever. It seems to me that they're just not real thrilled to be paying me this."

Carpenter signed, though, shortly afterward. By mid-May 1988, Carpenter was in the majors, called up after a string of injuries.

In his second major league start, Carpenter showed that first-round promise. He pitched a complete-game, four-hitter against the Cubs. On the season, though, Carpenter's ERA landed at 4.72 in eight starts.

Carpenter came back in 1989, largely as a reliever. He got into 36 games, with an ERA of 3.18. In spring 1990, though, Cardinals manager Whitey Herzog was down on the right-hander. Carpenter got off to a slow start that spring.

"If Carpenter doesn't throw any better than he's been throwing, he isn't going to get anybody out," Herzog told The AP before Carpenter went two innings of relief, giving up two hits. "He's got to open our eyes."

But that wasn't enough for the Cardinals to protect him in the expansion draft, the Marlins selecting him away for 1993. He stayed with the Marlins until mid-season, posting a 2.89 ERA in 29 starts. He was then dealt to the Rangers.

With the Rangers, though, his ERA increased to 4.22. In 1994, he was tried in the closer's role. By late June, he'd blown five save opportunities in 10 tries. That May, according to The Baltimore Sun, Carpenter responded to one blown save by explaining, "I never said I was a great pitcher."

Carpenter returned to the Cardinals' system for 1995, but played the year back at Louisville. For 1996, he signed with the Brewers, getting into his final eight major league games, the former first-rounder's ERA hitting 7.56.