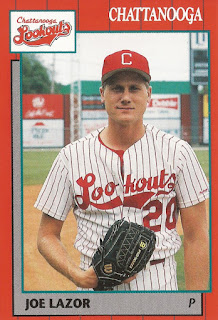 Joe Lazor arrived at AAA Nashville in June 1990 and he immediately noticed differences at AAA, compared to his time at AA, he told The Nashville Tennessean.

The team flew everywhere, for one, he told The Tennessean. But there were other things, too.

"You see a lot more experienced, older players who are capable of hitting your mistakes," Lazor told The Tennesean. "In Double-A, there are probably four or five while here there are six or seven."

Lazor made AAA that year for the first time in his fifth season as a pro. He never got to make the next comparison, to the majors. Injuries ultimately ended his career short of the bigs.

Lazor's career began in 1986, taken by the Reds in the fifth round of the draft out of Mount Vernon Nazarene University in Ohio.

Lazor started with the Reds at rookie Billings. He went 5-1 over 12 outings, eight starts, with a 1.61 ERA. He moved to single-A Cedar Rapids for 1987. He struck out 155 on the year, still third best in Cedar Rapids history.

After arriving at Nashville in 1990, Lazor struggled. He got into 11 games in relief and turned in a 7.90 ERA. After a poor outing in July, he expressed disappointment to The Tennessean.

"I didn't feel comfortable out there tonight," Lazor told The Tennessean. "In fact I haven't felt relaxed but two or three times that I've pitched since I've been with Nashville. You can't pitch on any level when you are tense and uptight, and that's the way I've felt."