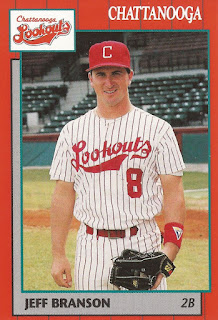 Jeff Branson came up for the Reds late in this September 1992 game, the score tied. By the time he was done, the Reds had the winning run across, according to UPI.

"You go up there and try to drive a good pitch," Branson told UPI afterward. "He got one up over the plate to me and I made good contact."

Branson got that game-winner in his first season in the majors. He went on to see time in nine big league campaigns.

Branson has since stayed in the game, working to ensure other players are in the best position to make good contact on the ball. He's returned to the majors as hitting coach for the Pirates, a job he continues in 2017.

Branson's career began in 1988, taken by the Reds in the second round of the draft out of the University of West Alabama.

Branson started with the Reds at single-A Cedar Rapids in 1989. He made AA Chattanooga in 1990 and AAA Nashville in 1991. He then debuted in Cincinnati in 1992.

Branson got into 72 games for the Reds in 1992, hitting .296. That season marked the first of seven-straight seasons where he saw the majors. He played in more than 100 games in three of those years and never in less than 58.

Branson then turned to coaching and managing. He coached at short-season Williamsport in 2003, then managed there in 2004. He managed at high-A Lynchburg in 2007 then moved to AAA Indianapolis as hitting coach in 2009.

In 2013, he moved to Pittsburgh as assistant hitting coach, then lost the assistant part of his title in 2014.

"How does a coach get the player to listen? One of Jeff's strengths, I believe, is developing trust," Pirates manager Clint Hurdle told The Pittsburgh Tribune in February 2014. "You are not going to allow a coach to coach you until you trust them. I think that's the challenge a hitting coach has, more so than any other coach, because a swing is a very private and prized possession."
1990 Minor League Tally
Players/Coaches Featured: 2,715
Made the Majors:1,036-38.1%-X
Never Made Majors:1,679-61.9%
5+ Seasons in the Majors: 428-X
10+ Seasons in the Minors:263
Posted by Steve78 at 9:40 PM