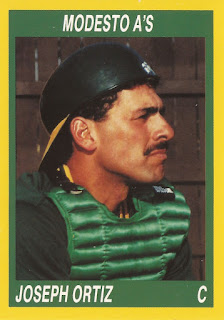 Joe Ortiz went out for a run on that June day in 1987. When he came back, he learned he'd been drafted, he told his hometown Lodi News-Sentinel.

Then he looked to keep running. His destination, he hoped, was the bigs.

"I want to play major league ball, I always have," Ortiz told The News-Sentinel. "It's not going to be an easy road."

For Ortiz, though, his road ended up being a short one, just four seasons. He never made it to AA.

Ortiz was drafted that June by the Brewers, selected in the eighth round out of the University of the Pacific.

He started 1989 at single-A Beloit. But he got just 19 games before he was released. By July, Ortiz heard from the Athletics.

"I'm not sure if it's class A or AA," Ortiz told The News-Sentinel, "but if there's a need for a catcher, you can bet I'm going to be there."

The Athletics wanted him in single-A. He got 12 games at Modesto and five at short-season Southern Oregon.

It was in 1990 where his road came to an end. Assigned back to Modesto, he got into just seven games, ending his career.

Ortiz soon returned home to Lodi. In 2011 he took over The Dugout Batting Cages north of Lodi in Galt, Ca.

"It's something I felt I could do to help the kids," Ortiz told The News-Sentinel. "Where there's a niche there's a need."