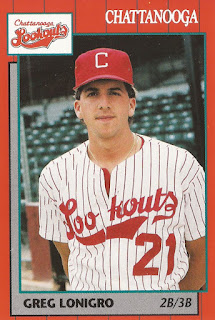 Reds minor leaguer Greg Lonigro looked ahead a couple years in 1991, according to The Pittsburgh Press.

A Pittsburgh-area native, Lonigro remained in AA in his seventh pro season. If he didn't make it to the bigs before then, the 1993 season held some extra promise, he told The Press.

"A lot of guys in my position are waiting for expansion because of the domino effect," Lonigro told The Press. "It's going to be a plus for guys who are on the borderline as far as age."

Lonigro stuck around for a couple more seasons. He never made the bigs. Expansion, though, did hold the key to his future.

Soon after his playing career ended, Lonigro turned scout and joined the expansion Diamondbacks. In 2005, he scouted Justin Upton, providing the information that allowed Arizona to take him first overall.

Lonigro's career began in 1986, taken by the Reds in the first round of the June secondary draft out of Florida College.

He hit his first professional home run in a May 1987 game for Cedar Rapids. "It was an 0-2 fastball right down the middle," Lonigro told The Cedar Rapids Gazette afterward.

Lonigro made AA Chattanooga in 1989, splitting time with Cedar Rapids. He hit .221 between them, with five home runs.

He played the next two seasons exclusively at Chattanooga. He hit .256 and .261. He then moved to the White Sox and AA Birmingham in 1992.

He played 1993 with the Cubs, getting his first and only look at AAA with 43 games at Iowa. He hit .254 there, playing the remainder of the year at AA Orlando, ending his playing career.

In 2005, Lonigro scouted Upton. He watched each game of Upton's senior season in high school, according to The Detroit Free Press.