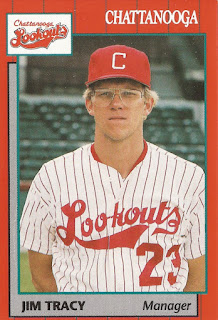 Mid-way into his second season as manager of the Dodgers in 2002, Jim Tracy drew praise from his bench coach, former major league manager Jim Riggleman, according to The Associated Press.

"That gets overlooked a lot in today's game," Riggleman told The AP. "When the umpire says, 'Play ball,' Jim understands the game. He doesn't overlook anything. His attention to detail is one of his greatest qualities. He's able to convey the importance of that to the players."

Tracy has gone on to convey that importance as a manager in the majors for three different teams over a decade. He managed five seasons with the Dodgers, two with the Pirates and then headed the Rockies.

Tracy made the majors as a manager after a career in the game that saw him play in the in the bigs with the Cubs, then become a manager in the minors and then return to the bigs as a coach.

Tracy's long career began in 1977, taken by the Cubs in the fourth round of the draft out of Xavier University.

Tracy played in two seasons with the Cubs, 87 total games. He hit .249 overall, with three home runs. He continued on for two more seasons, including one spent with Taiyo in Japan.

Tracy started his managerial career by 1987, taking over single-A Peoria for the Cubs. He moved to the Reds and AA Chattanooga for 1989 and then arrived with the Expos as manager at AA Harrisburg for 1993. He then returned to the majors as a bench coach for the Expos in 1995.

"It was all part of a process that I've been through to have an opportunity to manage in the big leagues," Tracy told The Chicago Tribune in 2001 as he managed the Dodgers. "There's no year that I look at [that] wasn't necessary to prepare me for what I'm doing right now."

Tracy moved to the Dodgers as bench coach in 1999. After two seasons of that, the Dodgers named him manager for 2001.

Tracy stayed for five seasons, making the playoffs in 2004 before being ousted in the first round. He moved to the Pirates in 2006, staying two seasons there, then arrived with the Rockies as manager in 2009.

Tracy took over the Rockies in May 2009 and then guided the club to the playoffs. Tracy won league Manager of the Year honors for his efforts.

Weeks after he took over the managerial role at Colorado, his second baseman Clint Barmes spoke to The Denver Post of his new manager.

"The thing that has impressed me is his steadiness," Barmes told The Post. "He's the same guy now as he was as bench coach. He's the same guy every day. He's always prepared, always consistent."