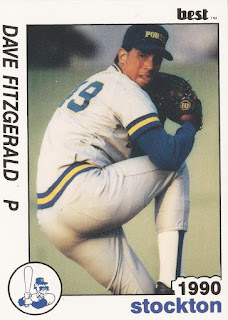 The possibility in this March 1995: He'd go north with the replacement Milwaukee Brewers.

"We're so close, yet there's still two weeks to go," Fitzgerald told The Milwaukee Sentinel. "You can sense the excitement now. Nobody's out there strutting. We're all out there hustling, trying to impress somebody."

Fitzgerald returned to the field that spring after three seasons away. He and the other players that spring didn't go north. That spring marked the end of his career.

Fitzgerald's career began in 1988, taken by the Brewers in the 27th round of the draft out of Davidson College in North Carolina.

He made high-A Stockton for 1990. He won his ninth game that July, pitching into the eighth inning. He went 10-10 overall.

Fitzgerald played 1991 between Beloit, Stockton and high-A Salinas. He made AA El Paso in 1992. He went 3-1 there in a mostly relief role, ending his career.

Fitzgerald stayed around the game, throwing batting practice for the Brewers in spring 1994. He then returned to the field for spring 1995. He gave up five runs in an inning early on.

When the strike ended and players left camp, Fitzgerald expressed interest in sticking around to throw more batting practice. He told The Associated Press backlash from players over his participation that spring wouldn't an issue.

"I'm not concerned," Fitzgerald told The AP, "because I'm the one throwing the ball."