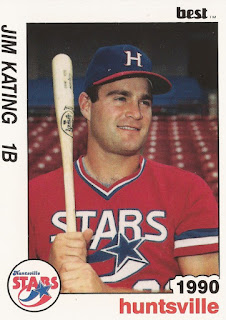 South Elgin High School hurler Tyler Hankins committed to a college 2015 and his coach Jim Kating could only praise him.

"One of the biggest upsides with him is that he has a baseball mind," Kating told The Daily Herald. "After high school, with him concentrating on only one sport, I can see him filling out and easily gaining another 2-3 miles per hour on his fastball."

Kating spoke of the young hurler with the experience of his long career as a coach, and a brief career in the pros. Kating played five seasons in the minors with the Dodgers and Athletics. He made it to AA, but no higher.

Kating's career began in 1986, taken by the Dodgers in the first round of the January draft out of Triton College in Illinois.

"Kirby had better speed and hit for a better average," area umpire and radioman Ken Cocker told The Chicago Tribune in October 1987, "but he didn't come close to Kating's power."

Kating started with the Dodgers at rookie Great Falls in 1986. He hit .298 in 69 games, launching seven home runs.

Kating left the Dodgers system in 1989 and arrived with the Athletics. He played the year between single-A Madison and Modesto, as well as AA Huntsville. He returned to Huntsville for 1990, hitting .227 in 72 games to end his career.