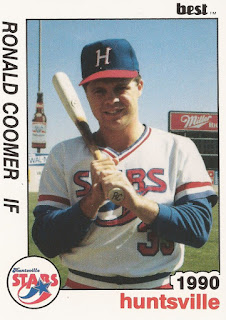 Going into his ninth pro season without seeing the bigs, Ron Coomer had heard multiple reasons why he hadn't made it to the majors.

"No matter what you do, there are going to be critics," Coomer told The Times in November 1994. "My priority right now is to play well defensively, but I don't see it as a big problem."

Coomer kept working - and he made the majors. He debuted with the Twins in 1995 and eventually played in nine big league campaigns and even made an All Star team. He's since turned to a field with a different kind of critic, radio broadcasting.

Coomer's career in baseball began in 1987, taken by the Athletics in the 14th round of the draft out of Taft College in California. He's also credited by his formal name, Ronald Coomer.

Coomer started with the Athletics at short-season Medford. He hit .345 in 45 games there. He moved to single-A Modesto in 1988, then AA Huntsville in 1990.

In April 1998, Coomer hit his first major league grand slam to lift his Twins over the Mariners, hitting it into the Kingdome's left-field upper deck. Others to complete that feat: Mark McGwire, Jose Canseco  and Jay Buhner,

"I don't think I've ever been mentioned with those guys before," Coomer told reporters afterward, "and I don't think I ever will again."

Coomer had perhaps his best first half in 1999, making the Mid-Summer Classic with the Twins. He even hit two home runs in a game that May. Overall, he hit .263 overall, with 16 home runs.

"You can only dream for something like that to happen," Coomer told The New York Post. "Especially when you're the new guy, coming into an organization like this. I just have to be ready to go every day, whenever I get in there."