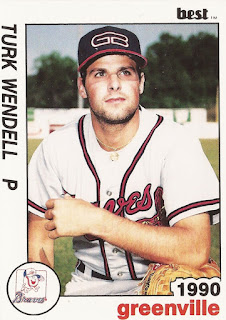 The minor leaguer Turk Wendell knew exactly how he was going to get to the major leagues, according to The Spartanburg Herald-Journal in August 1991.

His soon-to-be famous routine wasn't going to get him there, he told The Herald-Journal. Pitching well, would get him there.

"Some people just look at me for doing that stuff (on the mound)," Wendell told The Herald-Journal. "They don't look at me for what numbers I've put up. As far as I look at it, It's not doing any of that stuff that'll get you to the big leagues. It's the numbers."

Wendell kept putting up numbers, enough to make the majors in 1993 after a trade to the Cubs. The numbers he put up in the majors then kept him there for 11 seasons.

While he was putting up those numbers, he also made a name for himself in other ways, through his routine. That routine included acrobatic jumps over the baseline, drawing crosses in the dirt on the mound and making sure neither he nor his catcher both stood at the same time.

Those helped make him a household name and a fan favorite.

Wendell's career began in 1988, taken by the Braves in the fifth round of the draft out of Quinnipiac College in Connecticut.

Wendell started at rookie Pulaski, beginning his career as a starter. He went 3-8, with a 3.83 ERA over 14 starts.

Wendell continued as a starter throughout his minor league career. He hit AA Greenville in 1990, the got his first look at AAA in 1991 with three games at Richmond.

After a trade to the Cubs, he missed most of 1992, getting into only four games at AAA Iowa. He returned for 1993. He also made his major league debut that June. He got into seven games, starting four. He gave up 11 earned in 22.2 innings of work.

That spring, Wendell again answered questions about his list of superstitions.

"I guess it tends to get on people's nerves, but as long as you can back it up, no one cares about what you do," Wendell told The Associated Press. "But everyone wants to point their finger when things aren't going good."

In august 1999, Wendell helped his Mets to a 7-4 win over the Cardinals, striking out both Mark McGwire and Ray Lankford. He told The AP later that he was especially pleased striking out McGwire.

"There's always some extra juice when you face someone like that," Wendell told The AP. "He's the home run king. Those are the guys I get fired up facing."

He got his first taste of the post-season that year with the Mets, picking up two relief wins as the team made it to the NLCS. In 2000, he got to pitch in the World Series. He came on in Game 1 but took the loss in the 12th inning.

Wendell returned to the Mets in 2001, signing a contract fitting his personality and his 99 uniform number. It's total possible value was $9.999.999.99. He'd even asked to play one season for free, according to The AP, but was prevented from doing so by the collective bargaining agreement.

After signing his nearly $10 million contract, Wendell explained his approach to The AP and why he asked to play a season for free.

"A lot of players, we'd be playing this game if we got paid or not," Wendell told The AP. "I have the most fun when I'm playing the game of baseball. A lot of the monkey business and other things going on I don't care for."