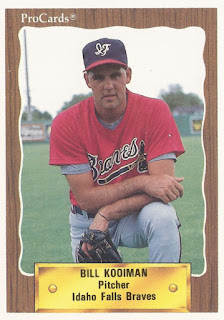 Salt Lake's Wayne Stofsky knocked two doubles in this August 1990. The second came off Idaho Falls' Bill Kooiman, according to The Deseret News.

It also came after Kooiman threw one tight, or "at my face," as Stofski described it to The News.

"You can't get too emotional," Stofski told The News of his reaction to Kooiman. "That's what the pitcher wants."

Kooiman through that tight pitch two months into his professional career. His career didn't last much longer. It began and ended that year in rookie ball.

Kooiman's brief career began that year, signed by the Braves as an undrafted free agent out of Austin Peay University.