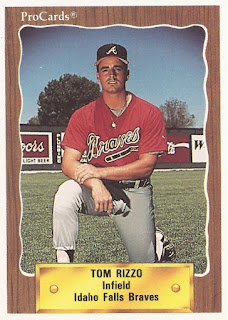 "I think one thing that I really, really bring to the team that I coach is intensity, fundamentals and knowledge of the game," Rizzo told The Eagle. "The physical part is easy, the mental part is the hardest part for the kids to comprehend. That's what I really pride myself on."

Rizzo learned the mental part himself from time as a player himself, as well as a coach and even from time in the Air Force, according to The Eagle. His time as a player consisted of three seasons in the Braves system. He never made AA.

Rizzo's pro career began in 1988, taken by the Braves in the 18th round of the draft out of North Adams State College in Massachusetts.

Rizzo started with the Braves at rookie Pulaski. He got into 50 games as an infielder, hitting .199. He hit two home runs and knocked in 13.

Rizzo returned for 1990, but he made the move from the field to pitching. He got into 14 games exclusively on the mound, starting two of them. He went 1-1, with a 6.49 ERA, ending his professional career.

Rizzo soon joined the Air Force and he got back involved in the game. Stationed in Alaska in 1992, Rizzo helped coach a legion team with a member of the Anchorage Bucs summer league team, according to the book "Diamonds in the Rough" by Lew Freedman.

Rizzo became a fan favorate as both the team and the city honored him, the team with plaque and the city with "Tom Rizzo Day," according to the book.