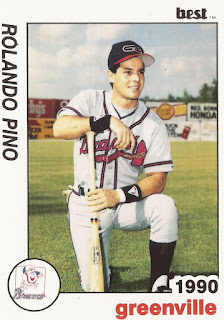 Rolando Pino's Hagerstown Suns had an error-filled first half in 2000. Pino knew his players had to respond themselves to correct that going forward, according to The Hagerstown Herald-Mail.

"Somewhere along the line, they have to have the desire to do the job right," Pino told The Herald-Mail. "We can only show them how to do it."

Pino showed players the intricacies of the game that year as Hagerstown's manager. He previously learned the game as a player himself. He played in nine seasons, making AAA, but not the majors.

Pino's career in baseball began in 1982, taken by the White Sox in the second round of the draft out of Miami Springs High School in Florida.

Pino arrived in Florida having been born in Cuba. His father played in Cuba, then his family got out in 1969.

Pino stayed with the White Sox through 1987, getting a brief look at AAA Buffalo in 1986 and playing his final year in the organization at AA Birmingham.

He moved to the Blue Jays for 1988 and single-A Myrtle Beach. He played 1989 between single-A Kenosha and AAA Portland with the Twins and his final brief season in 1990 between AA Greenville in the Braves system and AAA Denver with the Brewers.

By 1998, Pino had started his run as a minor league manager. He served that year as manager for rookie Medicine Hat. He moved to single-A Hagerstown for 1999 and 2000.

In 1999, Pino worked with a young Felipe Lopez.

"He's not ready for the majors yet, but he has all the tools to get there at some point," Pino told The Orlando Sentinel that July of the player who would spend a decade in the majors. "Felipe is a very exciting player who runs well, plays solid defense and he's very strong with an impressive offensive game."