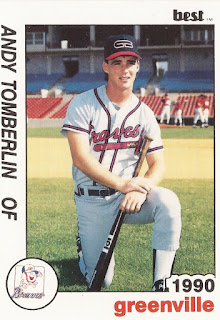 Andy Tomberlin started his professional career on the mound. But that wasn't where he wanted to be on the field, he told The Washington Observer-Reporter years later.

"I wanted to be an outfielder, but my dream of eventually becoming a major league player was more important," Tomberlin told The Washington Observer-Reporter. "It didn't really matter which position I played as long as I was playing."

It took Tomberlin into his third season arrive at the position he wanted to play. It took him into his eighth season to get to the other place he wanted to be, the majors.

Once he got there, Tomberlin saw time in six seasons. He's also gone on to a long career as a coach in the minors. He continues as a coach for 2015 at AAA Charlotte.

Tomberlin's career began in 1986, signed by the Braves as an undrafted free agent out of Piedmont High School in North Carolina.

Tomberlin started with the Braves between rookie Pulaski and single-A Sumter. In 16 outings, three starts, he picked up three wins and a 3.61 ERA. He then pitched again at Pulaski in 1987.

Tomberlin then made his move to the outfield in 1988. He played that year at single-A Durham and single-A Burlington. He hit .315 between them.

Tomberlin made AA Greenville and AAA Richmond in 1990, hitting .307 that year. He stayed at Richmond through 1992.

He then moved to the Pirates system for 1993. He played the year at AAA Buffalo. Then, in August, he got his call to Pittsburgh. He got into 27 games for the Pirates and hit .286.

Tomberlin returned to the majors with the Red Sox in 1994. He got into 18 games. He hit a home run late in a May game at Fenway, the ball just clearing the Green Monster and just staying fair, according to The Associated Press.

"I just hit the ball and I ran because I wanted to get as many bases I could if it hit the wall," Tomberlin told The AP. "I didn't see any signal from the umpire, so I just kept running."

Tomberlin's final big league time came in 1998 with 32 games with the Tigers. By the time he was done, he'd seen time in 192 major league games. He ended with a career average of .233.

Tomberlin has since gone on to a long coaching career and as a scout. He started as a scout for the Brewers. By 2004 he was a hitting coach in the minors at high-A Winston-Salem. He coached 2006 at AA Birmingham, returning there from 2009 to 2011.

For 2012, 2014 and in 2015, Tomberlin has served as hitting coach with the White Sox at AAA Charlotte. In April 2014, Tomberlin watched over former White Sox first-round pick Jared Mitchell, trying to get him in his own better position, according to The Charlotte Observer.

"Physically, athletically, he's as gifted as anyone on the field," Tomberlin told The Observer. "But we need to get that correlate into success on the baseball field. What were doing is trying to put him in a position to allow his abilities to take over."