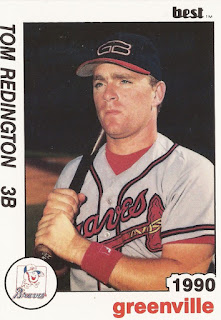 The expectations for Tom Redington were high. That was outlined by none other than the Braves general manager himself, Bobby Cox.

"His bat will carry him to the major leagues," Cox told The Associated Press as the team readied to sign their third-round pick in August 1987.

For Redington, though, it didn't work out like that. His bat ended up failing him early and he could never catch up. Redington made it to AA in his third professional season. He never made it higher.

Redington's career began that year in 1987, taken by the Braves 64th overall out of Esperanza High School in California.

Redington signed with the Braves in time to get 18 games in at single-A Sumter. He hit .321. His first full season, though, proved difficult for Redington. Over 129 games, he hit just .196.

Sumter manager Ned Yost told The Sumter Item in the midst of that season-long slump that the former high school star was having to deal with adversity for the first time.

"He had been used to his whole life being regular Tom Redington, not having to work hard and still be able to to excel," Yost told The Item. "Now he's playing against players of his own caliber and that doesn't get it anymore. I think he's learned that."

Redington moved to single-A Burlington and AA Greenville in 1989. His average over 95 games at Burlington rebounded to .295.

He played all of 1990 at Greenville. He hit .252 that year. He then moved to the Padres system that off-season, claimed in the minor league draft.

Redington played 1991 back at AA, at Wichita. He also had a good start to the year, The Los Angeles Times wrote. Redington told the paper he was just trying to stay on track.

"It's amazing, but one year you're at the top and everything is great," Redington told The Times. "The next year, everyone is asking you, 'What happened?' Sometimes it's that way from month to month or week to week. You have to take the good and the bad in this business."

Redington hit .284 for Wichita. He then moved to the White Sox system and played 1992 at AA Birmingham. He was released in spring training 1993 and he didn't play at all that year.

The Angels then gave him another chance in 1994. He mostly played at high-A Lake Elsinore, also getting nine games at AA Midland. Angels director of minor league operations Ken Forsch told The Times the team's expectations.

"We'll see how he does," Forsch told The Times that April. "He's got the desire and willingness to work. It's a question of getting out there and competing and things falling into place for him."

Redington hit .320 over his 85 games that year. It was his final season as a pro.