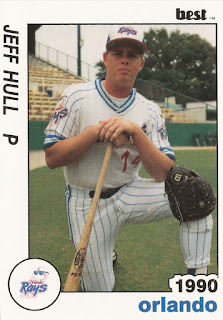 When Charleston Royal Jeff Hull started his second professional season in the bullpen, he had to bite his tongue, he told The Charleston Post and Courier.

He then got his chance, and ran with it to a 11-2 start and a spot in the 1984 South Atlantic League All-Star Game.

"I didn't say much when I wasn't starting early in the season," Hull told The Post and Courier. "But I'd always been a starter, and I wanted to start. When I finally got the chance, I said to myself, 'Great. This is it. Now I'm gonna do it."

Hull eventually did turn reliever and he later moved up to AA and to AAA. For Hull, though, he never made the majors.

Hull's professional career began in 1983, taken by the Royals in the 10th round of the draft, out of South Hills High School in California.

For 1984, he had that breakout year in Charleston. Over the season there, he went 16-5, with a 2.84 ERA. In August, Hull threw a complete-game, three-hitter against Florence.

Hull remained a starter at single-A Fort Myers for 1985, but started turning toward relieving back at Fort Myers in 1986.

Hull moved to the Mariners system and single-A Salinas for 1987, remaining with the Mariners for three seasons. He also spent those seasons largely as a reliever.

Hull returned for one more attempt at affiliated ball in 1990, with the Twins at AA Orlando. But he got into just a single game, a single out, ending his affiliated career. He then rounded out his career as a player and coach in Italy in 1991.