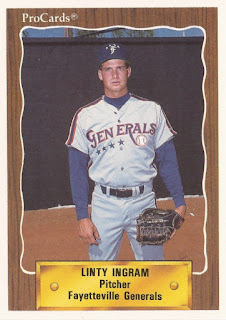 Linty Ingram began his pro career as a starter. For 1990, though, the Tigers looked to move him to the bullpen. The team also kept him at single-A Fayetteville, the place he'd pitched the previous season.

Ingram accepted the assignments, telling The Fayetteville Observer his focus remained on playing.

"I like starting," Ingram told The Observer. "But just as long as I get the chance to pitch."

By that point, Ingram had already gotten a chance to pitch in the College World Series with Arizona State. He'd also pitched in two pro seasons.

He ended up pitching professionally in five seasons. He saw AAA briefly, but he never saw the majors.

Ingram's career began in 1988, taken by the Tigers in the 14th round of the draft out of Arizona State. He went to Arizona State out of Hallsville High School in Texas.

At Arizona State, Ingram led the country in regular-season wins in 1988 on his way to Pacific-10 Southern Division Player of the Year honors. He also helped his team to the College World Series.

Ingram showed durability in an April contest, throwing 175 pitches in a win to save his bullpen.

"My legs were dead," Ingram told The Stanford Daily. "But Coach said, 'You're gonna have to suck it up because we don't want to have to use any more pitchers,' so I just said, 'I guess I just won't walk anybody.'"

Ingram played 1991 between single-A Waterloo and Charleston, then 1992 at high-A High Desert and AAA Las Vegas. He got into two games in relief at Las Vegas, giving up six earned in six innings of work. That 1992 season marked the end of his career.