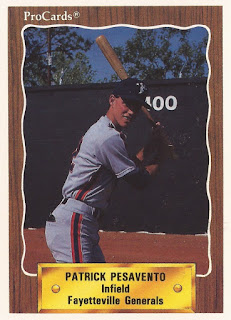 Pat Pesavento started his pro career in 1989 and he got advice from a familiar person - his brother.

His brother, Mike Pesavento, played two seasons in the minors and helped Pat by telling him what to expect, Pat Pesavento told The Fayetteville Observer.

"He said just to relax and as soon as the game's over with, it's over," Pesavento told The Observer. "You can't have peaks and valleys in this or else you're going to go nuts"

For Pat Pesavento it ended up being over too soon. Like his brother, Pat Pesavento's career ended p lasting just two seasons. He never made AA.

Pesavento's career began in 1989, taken by the Tigers in the 17th round of the draft out of Notre Dame. He's also credited by his formal name, Patrick Pesavento.

"People better not forget about Pesavento," Murphy told The ND Observer. "If they just concentrate on Peltier, Pesavento will beat them. He'll get a base hit to left, steal a base, whatever he has to do to win."

Pesavento started with the Tigers at single-A Fayetteville. He hit .248 over 71 games his first year there. He also stole 12 bases.

Pesavento returned to Fayetteville for 1990. He hit .381 in an early six-game stretch. He hit .280 overall, with 35 RBI and another 12 stolen bases. His second season turned out to be his last as a pro.