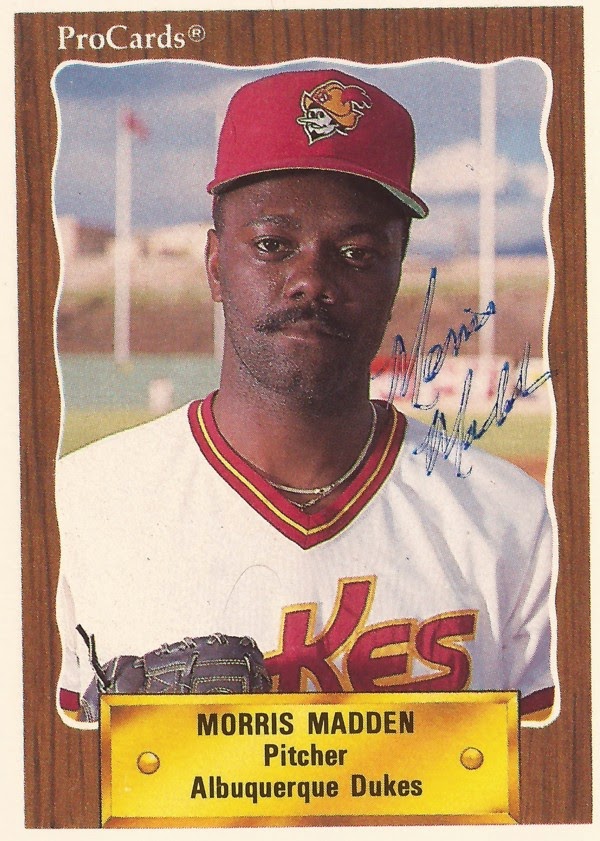 By the time Morris Madden was done playing, he recalled being just about done with baseball.

He'd made the majors in three seasons, but never pitching in more than nine games in a single campaign. That was all in a career that spanned 12 seasons.

"When it was over, I was pretty disgruntled, as far as baseball is concerned," Madden recalled to The Greatest 21 Days recently.

After some time, though, he came around. He accepted an offer to coach an American Legion team in his native South Carolina. Soon, he was a youth baseball instructor.

By 2006, he'd started his own organization in Charlotte, Carolinas Metro Inc., aimed at getting kids ready for college and using baseball to do that.

"After that," Madden said of his first American Legion coaching experience, "I kind of found out what my calling is. My calling is to help kids, help young kids not only in how to play baseball but just to help them in life in general."
Carolinas Metro is now affiliated with Major League Baseball's RBI program, Reviving Baseball in Inner-cities. He's also working to raise money to renovate a series of neglected fields to give the program and the kids a good place to play.

Madden spoke to The Greatest 21 Days by phone recently from his home in Charlotte, N.C.

Madden covered his own career, from growing up in South Carolina to playing in college and the pros, including the time he spent in the majors and his time since spent coaching kids.

His professional career wrapped up in 1990 and early 1991. He played his final season at AAA Albuquerque with the Dodgers, the organization that originally drafted him back in 1979.

He recalled a scout that year telling him that the organization made a mistake by letting him go in the first place. Madden responded that he knew mistakes happened.

Madden came back with the Pirates in spring 1991, but the club wanted to send him to Mexico. Madden wasn't willing to go. "I told them, 'that's it, I'm done.'"

It took Madden about three years and someone who remembered him from high school for him to return to the game.

The local American Legion had an opening for a coach and Madden's name came to mind.
"He asked me if I was interested," Madden recalled, "I told him, 'yeah, sure,  I'll come down there for the summer.'"

Madden went down for the summer and the team had a good year. They won the league, Madden had his calling.

After spending time as an instructor, he started Carolinas Metro with the hope of reaching inner-city Charlotte kids.

The basis of the organization is baseball, Madden said. But the focus is education.

"Our goal is to get them inspired to go to college," Madden said.

He put the number at nine out of 10 participants furthering their education beyond high school.

Some also go on to play baseball collegiately, "but that's not what we're there for," Madden said. "We're there to keep these kids inspired and wanting to aspire to further their education once they get out of high school."

Part of the program is just talking, Madden said. They try to talk to the kids about what they're going through, what their aspirations are. It's being a mentor, he said.
Once they find out what a kid's needs are, then they put together a program for them.

"We try to give them every tool that we have available that will aid them in whatever they're lacking," Madden said.


To get kids involved, coaches both recruit kids and the kids come to the program. They also work with the four area high schools in economically challenged West Charlotte. The school coaches, he said, can see results during the baseball season and in the students' schoolwork.

Of those who have gone on to play in college, none yet have played professionally. Madden believes to players now in Division II have the best opportunity to be the first.

Focuses now for Carolinas Metro are increasing the number of players so they can have their own a leagues under RBI and renovating fields..

The fields they have sat disused for a decade. They're working to raise $500,000 to get the fields back in shape. There's a lot of work to do, Madden said.

The program itself, he said pays its own dividends.

"There's nothing better than to see a kid that's really struggling at one point and is starting to do very well and," Madden said, "to take an interested in his life in general."