Interview Part 3: Morris Madden, Was There 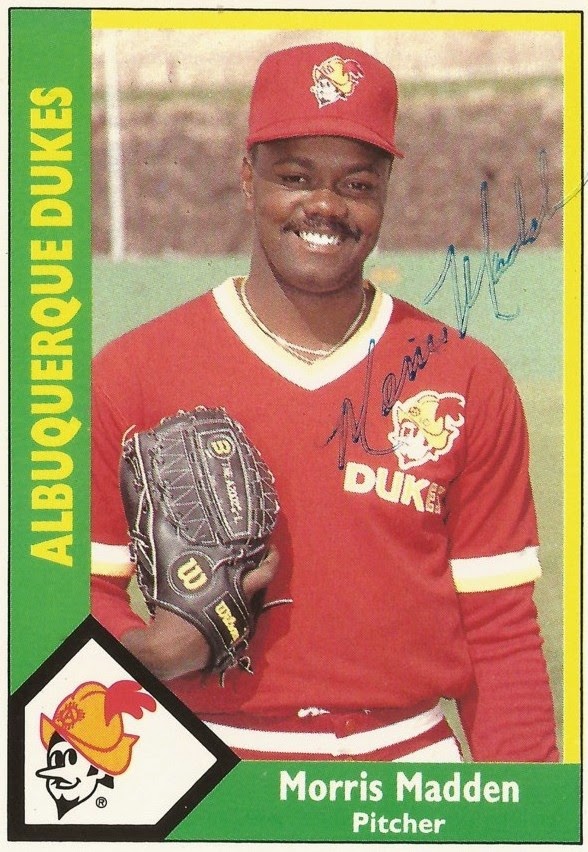 Morris Madden recalled his time with the Pirates in 1989 as different than his previous trips to the majors.

"I had an opportunity with Pittsburgh, I really did," Madden recalled to The Greatest 21 Days recently. "I think I put a little bit too much pressure on myself when I was there."

That showed in his performance. His teammates, though, were encouraging, he recalled.

"They kept telling me I had the stuff to be there. I just had to calm down and do what I normally do," Madden said. "It just didn't work out.

"I was glad to have the opportunity, but I think I just had a bit too much pressure on myself to stay."

Over nine outings spanning April, May and June of that year, Madden pitched 14 innings. He gave up 11 earned runs.
That season ended up being the last of three years Madden had spent time in the bigs. Overall, he saw time in 16 major league games between the Tigers and the Pirates, getting 21.1 innings of work.

Madden spoke to The Greatest 21 Days by phone recently from his home in Charlotte, N.C., where he now heads up a youth baseball program. That program, Carolinas Metro Inc., has become Madden's passion, helping kids succeed in life.

Madden covered his own career, from growing up in South Carolina to playing in college and the pros, including the time he spent in the majors and his time since spent coaching kids.

Madden's major league career began in June 1987, called up to Detroit from AAA Toledo. That call came in his ninth professional season.

Madden recalled receiving a warm welcome, especially from the veterans. "I thought that was the way it was all the time," Madden recalled.

There were also other things to do after he arrived, he recalled, like take in exactly where he was.
"Once I stepped out of the clubhouse and got out there on the field, I kind of looked around and tried to take it all in," Madden said. "It was outstanding."

Madden's debut came June 11 against Milwaukee. He picked up three outs and he wasn't hit hard. But he did give up a hit and three walks and was charged with two runs. One of the walks was intentional. The one hit was a single.

His second outing came five days later at Toronto. This time, he gave off a lead-off double to Fred McGriff. Madden recalled trying to regroup and not let that shake him. He got a ground out and a fly out, but he also gave up another single.


Those two outings ended up being his only two with the Tigers. He was send back to Toledo shortly after. By mid-August, he was on his way to the Pirates organization in a trade. He played out the year at AAA Vancouver.

In 1988, he started the year with the Pirates' new AAA affiliate Buffalo. Buffalo, he recalled, was one of his favorite of the cities he played in. "It was cold, but they treated you like a big leaguer there," Madden said.

He had to wait until August for his next trip to the majors. He got to go on that trip with his wife.

Madden got into one outing Aug. 15 and four more in September. Over 5.2 innings for the Pirates, Madden gave up five hits, but no runs.

In 1989, Madden got his first outing April 18 at St. Louis. It was a single inning where he gave up one hit and no runs. He also picked up the win. It was his first major league win. "After 10 years, I finally got a big league win," Madden said.

Madden spent his major league time in 1989 in three different stints over the first three months of the season. He recalled after one of the stints, Pirates manager Jim Leyland telling him he didn't do anything wrong, but they just needed to take a look at another player.

"I was really upset about that, but I went back to Buffalo and did well down there," Madden said. Soon, an injury had him back in Pittsburgh in June.

Up until that point, all of Madden's appearances had been in relief. The injury, to Pirates starter Bob Walk, meant Madden was starting.

"It didn't really matter to me exactly what role they wanted to use me in," Madden said, "as long as I was there."

Madden was there in three seasons and 16 games. He played one more season in the minors at AAA Albuquerque in 1990, but he didn't make it back to the bigs.

Madden has since gone on to a second career in baseball, one where he teaches kids the game. It's also one where baseball isn't really the goal, bettering lives is. (Part 4)