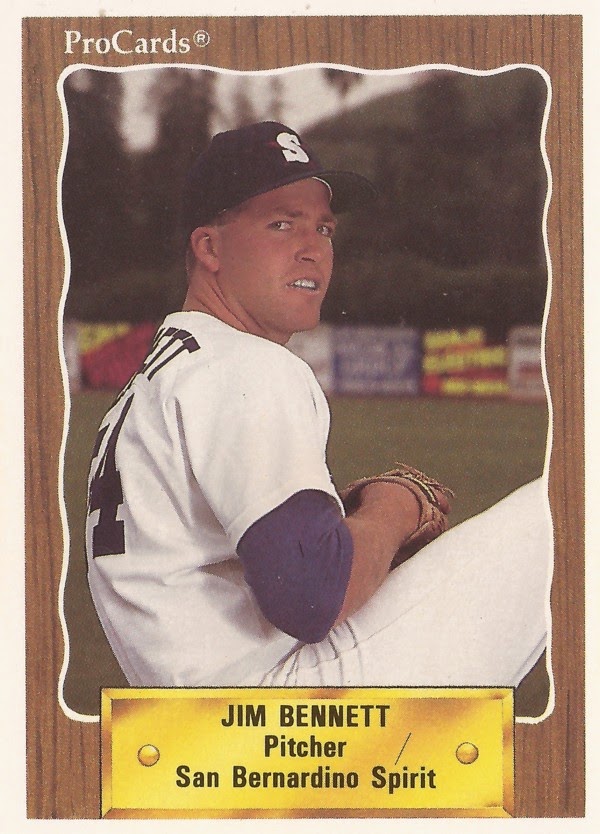 San Jose Giants pitching coach Jim Bennett's first impression of Sergio Romo was as a pitcher who wasn't afraid to let the bat hit the ball, he told MiLB.com in 2007.

Bennett didn't see Romo as a strikeout pitcher, he told the site.

"He throws strikes, a lot of them, to the point where you're surprised the few times he would fall behind," Bennett told MiLB.com that October. "He gets ahead of everyone -- and when you're constantly pitching ahead, no matter what kind of stuff you have, batters are going to start taking defensive hacks. And those lead to strikeouts."

Bennett made those assessments of the future major league all-star Romo as part of his long career as a minor league pitching coach. That career came after a playing career that was comparatively shorter, just three seasons.

Bennett's playing career began in 1989, signed by the Mariners as an undrafted free agent out of Chapman University in California.

With the Mariners, Bennett started in the rookie Arizona League. He moved to single-A Wausau in 1989. He went 6-12 that season, with a 4.02 ERA.

Bennett moved to high-A San Bernardino to start 1990. He got into four games there, with a 1.69 ERA.

He then moved to the Padres system and single-A Charleston. He went 5-15 at Charleston, with a 3.06 ERA. He picked up his first win to eight losses in a June game, going into the eighth inning wile giving up two earned. It was his final season as a pro.

Bennett then went on to his career as a pitching coach. By 1996, he was pitching coach at short-season Boise. He coached at single-A Cedar Rapids in 1998, at high-A Visalia in 2003 and then high-A San Jose in 2006, among other stops in between.

After a few years off, Bennett returned to coaching in fall 2014, signing on as a coach with the Perth Heat of the Australian Baseball League, according to TheABL.com.au. He also plans to return to the minors in 2015.