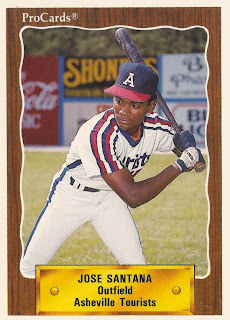 Jose Santana showed his speed right away. But he couldn't keep it up.

In his first season as a pro in 1988, Santana stole 22 bases in the rookie Gulf Coast League. He stole those bases in 53 games.

In his second season, largely at short-season Auburn, Santana stole 27 bases over 67 games.

In his third season, though, he stole just two, over 31 games. Those two stolen bases were also his last.

Santana's pro career began in 1987, signed by the Astros as an undrafted free agent out of his native Dominican Republic.

Santana moved to single-A Asheville for 1990. There, he got into just those 31 games. He hit .243, ending his Astros career.