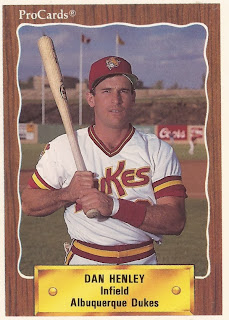 Dan Henley proved a durable player for the 1985 USC Trojans. He also proved a productive one, his coach Rod Dedeaux told The Los Angeles Times going into the next season.

Henley did well enough to be taken by his hometown Dodgers in the seventh round of the 1986 draft. While he hit, ran and played defense in a career that spanned six seasons, he never did so in the majors.

Henley, though, has gone on to a career as a coach in high school, at Glendora High School near Los Angeles.

Henley arrived with the Dodgers after a career at USC, where he was named a Pac-10 All-Star in 1986. The previous year, he helped his team to a 10-3 win with a grand slam. Between seasons, Henley played summer ball in Alaska.

Henley's playing career began at single-A Vero Beach with the infielder hitting .210 in 43 games. He stayed in single-A through 1988, moving to single-A Bakersfield the second two seasons.

Henley returned to Albuquerque for 1990, hitting .305 n 87 games. But Henley never got a call to Los Angeles.

For 1991, Henley moved on to the White Sox system at AAA Vancouver. He hit just .195 in 70 games, ending his playing career.

In 2012, Henley is continuing his post-playing career, as head baseball coach for Glendora High School.

Henley's team won the California Interscholastic Federation Southern Section title in 2010. Then, in 2011, they lost in the playoffs.

"We persevered, I can't say it enough, I'm happy for the boys for sure," Henley told Glendora Patch after the 2011 loss, "They had a lot of character, we started out the season 2-2 and wondering what kind of club we would be. Obviously with the string of victories and the way we competed all year, we showed what kind of character we had."