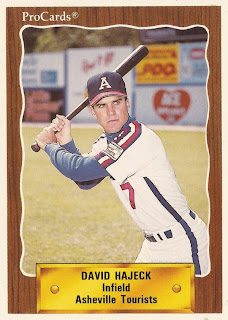 Going into his sixth season as a pro that year, Hajek had yet to play in the majors. But he was also coming off his first season at AAA.

"Three years ago he was a part-time player," Sweet told The Tucson Citizen. "He has made himself into a major league prospect."

Hajek would make the majors that year, getting called up in September so Astros manager Terry Collins could see him play first hand. But the call up would also come with some controversy, teammates ostracizing him for playing in games that spring, according to The Houston Chronicle.

Hajek's career began in 1989, signed by the Astros as a free agent out of California Polytechnic State. Unsigned, Hajek had been ready to get a real jog, as an architect, when an Astros scout spotted him in the final week of a tournament, Hajek told The Chronicle later.

In May 1991, Hajek's manager at Osceola Sal Butera praised Hajek for his versatility, telling The Orlando Sentinel Hajek simply wanted to help the ballclub win.

"Haji's the kind of player any manager loves to have on his ballclub," Butera told The Sentinel. "A versatile, hard-working guy you never have to ask to do anything. He's always looking to improve his skills."

Hajek returned to Jackson for 1992 and 1993. Along the way, according to The Chronicle, Hajek attained cult status in rival Tulsa for his handling of hecklers there, playing along.

Hajek then made AAA Tucson in 1994, then, in spring 1995, he played games for the replacement Astros. It was Houston manager Terry Collins who convinced him to play, The Chronicle wrote.

By September, Hajek was in the major leagues, called up by Collins looking for someone to step in, should the team lose Craig Biggio the next season, according to The Chronicle. The call-up, though, came with the background feelings still raw from the strike.

On the field, Hajek ended up getting into five games, with five trips to the plate and two official at bats. He didn't get a hit.

Biggio stayed in Houston the next year and Hajek returned to the minors. He got one final look at the bigs in September 1996, getting three hits in 10 official at bats.

Hajek continued playing in the minors through 1999, going through the Tigers, Padres and Rockies systems, ending his playing career.

He has since gone on to remain in the game, as a coach, returning as hitting coach to two of his old haunts, Asheville and Tulsa. In Tulsa, he served as hitting coach for four seasons, from 2008-2011. For 2012, he was promoted to Rockies minor league infield coordinator.

As hitting coach at Tulsa in June 2011, one of Hajek's pupils Darin Holcomb spoke to The Examiner of how Hajek had helped him.