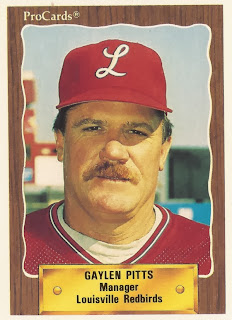 Gaylen Pitts made the majors in May 1974, and he quickly made an impact. He got hits in three of his first four games, including a three-hit effort in his fourth. The third hit proved the game winner.

"I probably won't be around long," Pitts told reporters afterward. "But this is a funny game. You never know."

Pitts didn't last long in the majors. In a playing career that spanned 13 total seasons, he played in 28 total games in the big leagues.

Pitts, though, has ended up sticking around in the game. His playing career ending, Pitts moved on to a lengthy career as a coach, manager and coordinator that continues in 2012.

He moved to the Athletics system in mid-1971, making Oakland for the first time in 1974. Pitts got into 18 total games that year, hitting .244. He then returned for 10 more games in 1975, getting three more at bats, marking the extent of his major league career.

Pitts last played in the minors in 1977. By 1978, he was managing at single-A Modesto in the California League at the young age of 31. He also returned to the organization that originally signed him, the Cardinals.

Pitts spent much of the next 30 years as a manager in the Cardinals system. He managed AA Arkansas for four seasons in the 1980s. For 1990, he managed AAA Louisville.

He returned to the majors in 1991 as Cardinals assistant coach. He also pegged young Ray Lankford that spring as having a bright future that spring, having seen him each of the past two seasons.

"By the time you think he's going into a slump, he'll rocket a ball somewhere," Pitts told The Associated Press. "He's going to be good."

After serving as hitting coach at AAA Indianapolis in 2003, Pitts took time off, The Memphis Commercial-Appeal wrote. He returned to managing in 2006 and to the Cardinals system in 2007.

For 2009, Pitts became Cardinals special assistant for player development, using the experience he gained as a manager in the minors to work with the organization's managers in the minors, The Commercial Appeal wrote. He continued in that role for 2013.

''I try to stay positive with everybody because I know how tough managing is,'' Pitts told The Commercial Appeal. ''I pat 'em on the back and say you're doing a helluva job, keep up the good work. I know when I managed and guys came in, it always made me feel good when somebody tells you you're doing a good job because a lot of times you don't hear that.''