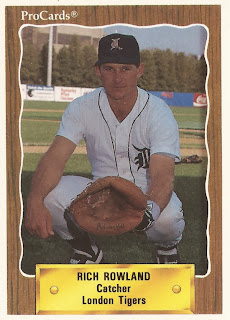 Rich Rowland grew up in Northern California, putting his talents to work in the logging industry, he told The Toledo Blade in 1992.

Soon, though, he turned those talents to another industry, baseball, according to The Blade.

"I only played baseball on Sundays during the summers," Rowland told The Blade of his youth. "Then somebody told me I had baseball ability and I should pursue it."

Rowland pursued it, and took it all the way to the major leagues. And the catcher eventually saw time in six big league campaigns with the Tigers and the Red Sox.

Rowland's career began in 1988, taken by the Tigers in the 17th round out of Mendocino College.

With the Tigers, Rowland started at rookie Bristol, moving to single-A Fayetteville for 1989 and then AA London and AAA Toledo for 1990.

That September in 1990, Rowland also made it to Detroit, getting into seven games and going 3 for 19. He returned to Detroit for four games in 1991 and six in 1992. He played the rest of those seasons back at Toledo.

In August 1992, at Toledo, Rowland caught fellow Mud Hen Buddy Groom, watching him have a poor outing. Rowland's observations were that Groom didn't have command of his pitches, he told The Blade.

"He needs to concentrate on his changeup and curveball and get those over, and keep it down," Rowland told The Blade of Groom. "A couple of adjustments, and I think he'll be fine."