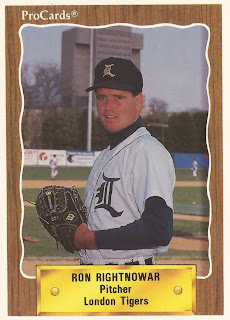 Ron Rightnowar had looked forward to this day since he was a kid. When it came, it was not anywhere close to what he imagined, according to The Toledo Blade.

This was the day in May 1995 that Rightnowar entered the clubhouse for the first time as a major leaguer.

"I figured it would be a real special day in my life, just like the day I got married," Rightnowar told The Blade years later. "But I felt awful. They were all giving me the cold shoulder."

His new teammates were giving him the cold shoulder because Rightnowar had been a replacement player. Gone was a welcoming clubhouse. What greeted him was one where his new teammates didn't even want to be near him.

Still, in his ninth professional season, Rightnowar had made it to the majors. He also stayed for much of the season, getting into 34 games in relief. It was the extent of his major league career.

Rightnowar's professional career began in 1987, signed by the Tigers as an undrafted free agent, out of Eastern Michigan University and Whitmer High School in Toledo.

Speaking to The Blade in 1987, Righnowar told of how he had almost all but given up on a pro career when a scout spotted him. He was also optimistic about his future.

"I don't think the fun will ever leave the game," Rightnowar told The Blade that April. "When I get on the mound it's always the same giddy fun it was when I was a kid."

In 1990, Rightnowar also made AAA Toledo, pitching for his hometown team. He returned to Toledo for half of 1991 and then all of 1992. In a July 1992 game, Rightnowar went three innings of hitless relief.

"It felt good at the beginning of the night," Rightnowar told The Blade after that outing. "It's really no secret, you keep the ball down and throw strikes."

Rightnowar continued at Toledo into 1993, when he was traded that August to the Brewers. With the Brewers, Rightnowar played 1994 at AAA New Orleans, then played the next spring as a replacement.

Called up to Milwaukee in May 1995, Rightnowar got into 34 games in relief, picked up two wins and one save. His ERA finished at 5.40, finishing his professional career.

"[Jake] got us going right out of the gate and he's been doing it all year," Rightnowar told The Blade after a 2009 win. "It's really fun for his dad to watch."