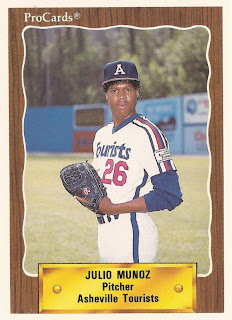 Asheville Tourists manager Frank Cacciatore knew the season was going to get harder, but he was just happy for the early win, he told The Charleston Post-Courier early in April 1990.

It was a win against the Charleston Rainbows that was keyed by a six-inning performance by starter Julio Munoz, who gave up just two earned runs for the win.

"It's going to be tougher down the line," Cacciatore told The Post-Courier, "but I have no complaints."

For Munoz, his line didn't end up being that long. He got just eight other starts that year for Ashville. His Asheville starts also ended up being the final outings of his professional career.

Munoz' career began in 1988, signed by the Astros as a undrafted free agent out of his native Dominican Republic.

Munoz first made it to a United States field in 1989, playing in the rookie Gulf Coast League. There, he got nine starts and had no success in the win column. He lost all nine, with an ERA of 4.18.