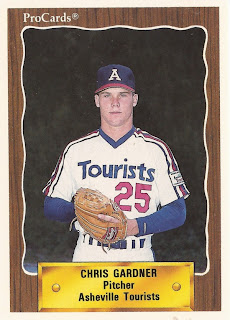 Howe let Gardner pitch with the tying run on second and a batting champion candidate in Willie McGee up at bat.
"That was a great confidence-builder," Gardner told The Associated Press after his first major league win. "But it was even more of a confidence-builder when I got (McGee) out."

Gardner picked up his first major league win that day in his fourth major league start. He would see  big league mound just once more, days later, marking the extent of his major league career.

Gardner's pro career began in 1988, taken by the Astros in the sixth round of the draft, out of Cuesta College in California.

Gardner debuted with Houston Sept. 10, going five innings and giving up six earned runs for the loss. In his third start, he went into the sixth inning, giving up just a single earned run. In all, Gardner got into five games, posting a final ERA of 4.01.