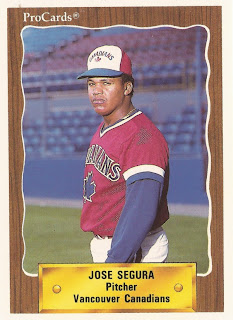 So, when Segura finally made the majors as a reliever, Segura was happy with that.

"The bullpen," Segura told The Tribune, "is the place for me."

For Segura, though, his major league relief time was brief. It also didn't go as he or the White Sox had hoped.

Segura's path to being a major league reliever began in 1981, signed by the Phillies out of the Dominican Republic. He played that first season at rookie Helena, getting into 25 games, all in relief, with a 4.37 ERA.

Segura also picked up six wins between the two, going four hitless innings in relief for one Bend victory.

Segura played all of 1986 at AA Knoxville, getting into 24 games, 17 of them starts. He also got two saves, one of them a three-inning outing in late August.

In his three other outings, though, he gave up no fewer than five runs apiece. He got into four games, giving up 13 runs in just 8.2 innings.

Segura returned for seven more outings in 1989 and did worse. In six total innings, Segura gave up 10 earned runs.

After spending all of 1990 back at AAA Vancouver, Segura signed with the Giants for 1991. He also got his last major league time. And he improved. In 11 outings for San Francisco, Segura gave up just eight runs in 16.1 innings for a 4.41 ERA.

Segura played parts of three more seasons in the minors, with the Reds and Yankees' AAA clubs, throwing his last pitch in 1995.