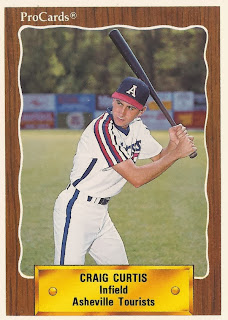 The Gulf Coast League Astros had a tough start in 1989. A consistent force, though, was infielder Craig Curtis, his manager Julio Linares told The Orlando Sentinel.

"Curtis has been one of the bright spots this year," Linares told The Sentinel. "He's doing a good job for us with the bat. The guys are struggling, but they will come along."

Curtis ended that year hitting .323 for the GCL squad. But he couldn't keep it up. He played just three more seasons, never making AA.

Curtis' career began that year, taken by the Astros in the 8th round, out of North Kansas City High School.

Curtis started with the GCL Astros, hitting one home run and knocking in 14. For 1990, he moved to single-A Asheville. There, he hit just .228, but his home run total increase to 17.

Curtis moved to hgh-A Osceola for 1991. His average dropped that year to .207. His home run total also dropped to zero.