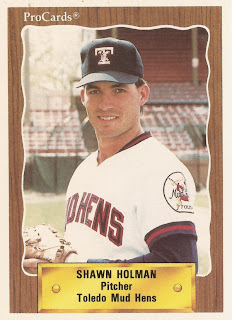 It was also a day Holman thought he might never see. He was in his eighth year of professional baseball, getting his first taste of the majors.

"It felt great," Holman said in a wire story of his debut. "It was a long time coming. At times, it seemed like it would never happen. I got a warm feeling all over going out there in the eighth inning."

But in a professional career that spanned 14-plus seasons, those would be the only five major league games in which he would play.

Holman started in the rookie Gulf Coast League in 1982. He didn't make AA Nashua until 1985. The next year he caught his break, the one that would eventually lead to him being called up to the majors. Holman was traded to the Tigers.

His debut and final game past him, Holman returned to the minors. Speaking to the Beaver County Times in 2000, Holman cited the 1990 spring lockout with helping derail his chances with the Tigers.

"Fringe guys like me who had a chance of making it to the majors leagues, didn't have the opportunity," Holman told the paper. He added later, "That was probably the one point that turned my career around."

Instead of pitching in Detroit for 1990, Holman pitched in AAA Toledo again and even AA London. The next year was spent with the Braves at AAA Richmond. A year in Mexico and Holman was back in Richmond.

For 1994, it was on to Ottawa and the Expos organization. That year, he saved 31 games for the Lynx with a 2.99 ERA. That year was also the strike year, with no September call-ups.

Then it was the Dodgers organization for 1995 and back with the Pirates for 1996. During spring 1995, Holman was one of the many minor leaguers who was asked to be a replacement player, but Holman declined.

Two more years in the Mexican League, according to the Beaver County Times, and Holman was done, a elbow injury saw to that.

Speaking to The Times in 2000, Holman recalled his time with Detroit that September in 1989.

"It was special because it had taken so long to get there," Holman told the paper. "You never know if you're ever going to get there."