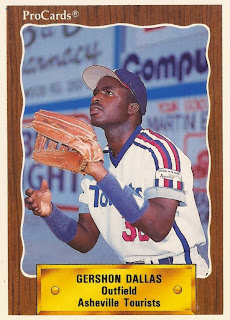 The high-A Osceola Astros ran over the Baseball City Royals in this May 1991 game, 7-3. Helping them do it was outfielder Gershon Dallas.

Dallas picked up two doubles in this game, two of 16 he picked up on the season.

Dallas hit those doubles in his third season as a pro. He got time in just one more.

Dallas' career began in 1989, taken by the Astros in the seventh round of the draft, out of Hillsborough Community College in Florida.

With the Astros, Dallas played in the rookie Gulf Coast League, hitting .213 over 47 games.

For 1990, Dallas moved to single-A Asheville. There, he played under manager Frank Cacciatore. Cacciatore recalled Dallas years later as Dallas' college coach was a college teammate of Cacciatore.

"He was a pretty good talent," Cacciatore told The Greatest 21 Days in August 2013 of Dallas.

With the Tourists, Dallas improved his average to .278, hitting three home runs and 55 RBI. He went 1 for 3 in a May game.