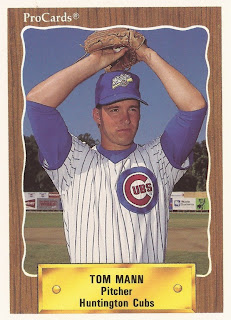 Thomas Mann had two hopes as he started his professional career in 1990, one hope many people achieve and another hope relatively few have achieved.

"I played two years at Oklahoma State and one year at UNLV," Mann was quoted as saying on his ProCards card back. "I want to finish college and make it to the majors."

Whether Mann accomplished his first hope, finishing college, is unclear, he did not accomplish his second hope, making the majors. Mann's professional baseball career lasted just two seasons, never making it above single-A.

Mann's professional baseball career began that year, signed by the Cubs as an undrafted free agent out of UNLV. At UNLV, Mann played the 1989 season and was a letterman in 1989. Mann is also known by the less-formal Tom Mann.

With the Cubs, Mann started at rookie Huntington. He also had a good first year. At Huntington, Mann got 10 relief outings, posting a 2.29 ERA.

Mann also moved up to single-A Peoria, getting nine outings, one start. At Peoria, Mann got 16.1 innings of work, giving up just three earned runs for a 1.65 ERA. Between the two levels, Mann also picked up two wins and a save.

For 1991, Mann returned to Peoria. He also got 44 outings, one start. He also started strong, giving up a single hit in 7.1 innings to begin the year. Mann also had picked up two saves by then, according to The Arlington Heights Daily Herald.